This is the first manga series I have gotten into and I am seriously loving it so far. If you haven't purchased them yet, I highly reccomend getting the Black Editions as they look awesome. The edges of the pages are black and the overall effect is damned sexy. Plus each Black volume, contains two of the original volumes. More Death Note, less money.

The premise behind this series starts off simply enough. Ryuk, a death god, is bored. He decides that dropping his Death Note in the human relm will provide just the entertainment he needs. The Death Note is a myserious book that, once touched by a human, becomes the property of that human, thus enabling him or her to kill people by simply writing their names in the notebook. Of course, there are many rules attached to the use of the Death Note.

Light Yagami is the perfect teenager. He achieves top marks and has never stepped out of line his enitre life. When he finds the Death Note, his whole world changes.

At the risk of giving anything away, I will say no more on the plot. However, the characters and their motives and development are astounding. This is an incredibly intricate series that has twists and turns in every chapter. I cannot reccomend it enough.

The standard format of manga comics takes some getting used to (right to left), but it didnt deter me at all. I was hooked from the start.

The black editions come with colour plates and bonus content that is not availible elsewhere.

For those of you too lazy to read, there is also an Anime series which, I believe, stays true to the series. 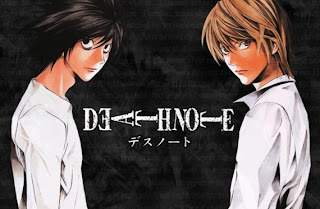 L and Light, two of the main characters in Death Note.
Posted by Monique at 12:10 PM

Email ThisBlogThis!Share to TwitterShare to FacebookShare to Pinterest
Labels: manga