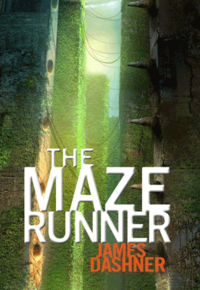 When Thomas wakes up in the lift, the only thing he can remember is his first name. His memory is blank. But he’s not alone. When the lift’s doors open, Thomas finds himself surrounded by kids who welcome him to the Glade—a large, open expanse surrounded by stone walls.

Just like Thomas, the Gladers don’t know why or how they got to the Glade. All they know is that every morning the stone doors to the maze that surrounds them have opened. Every night they’ve closed tight. And every 30 days a new boy has been delivered in the lift.

Thomas was expected. But the next day, a girl is sent up—the first girl to ever arrive in the Glade. And more surprising yet is the message she delivers.

Thomas might be more important than he could ever guess. If only he could unlock the dark secrets buried within his mind.

Ever read one of those books that you feel you should like but really, really don't? Maze Runner was like this for me. This on the list of books recommended for fans of The Hunger Games and I was expecting something  equally epic.

Maybe it is just me, but Maze Runner is not worthy of the hype behind it. The writing just didn't work for me and I felt that the mystique and intrigue Dashner tried to create worked a little too well. I really do not enjoy being confused when reading a book. This could have a lot to do with the little time I have to read these days, that it takes me longer to get through a book, but still.

I found the Gladers' dialect highly annoying. This is a real pet peeve of mine, when authors try and create new slang for their worlds. It is simply distracting and usually adds no value to the story. (Such as Scott Westerfeld's Uglies series... OMW. Awful.)

Maze Runner is simply riding the wake of Hunger Games' success in my opinion.

Up next: Shatter Me! And, oh my word, this book is epiiiiiiiiic!
Posted by Monique at 11:13 PM