A Game of Thrones by George RR Martin 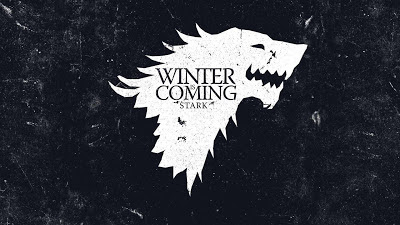 Long ago, in a time forgotten, a preternatural event threw the seasons out of balance. In a land where summers can last decades and winters a lifetime, trouble is brewing. The cold is returning, and in the frozen wastes to the north of Winterfell, sinister and supernatural forces are massing beyond the kingdom’s protective Wall. At the center of the conflict lie the Starks of Winterfell, a family as harsh and unyielding as the land they were born to. Sweeping from a land of brutal cold to a distant summertime kingdom of epicurean plenty, here is a tale of lords and ladies, soldiers and sorcerers, assassins and bastards, who come together in a time of grim omens.

Here an enigmatic band of warriors bear swords of no human metal; a tribe of fierce wildlings carry men off into madness; a cruel young dragon prince barters his sister to win back his throne; and a determined woman undertakes the most treacherous of journeys. Amid plots and counterplots, tragedy and betrayal, victory and terror, the fate of the Starks, their allies, and their enemies hangs perilously in the balance, as each endeavors to win that deadliest of conflicts: the game of thrones.

If you can't tell already, I am a huge fan of House Stark. And quickly becoming a fan of this series!

I was a little dubious about starting Game of Thrones as, when it comes to fantasy, I am pretty damn fussy. But, after a few chapters, I was most definately hooked. The characters are well-constructed and constantly offer surprises and twists. Just when I thought I had the story figured out, a character would come along and throw a spanner in the works. It is not often I am left guessing, but this book had me doing that throughout!

Don't be lead into temptation and watch the series first. I avoided that and I think it might ruin the beauty of the book knowing what is going to happen and what part the characters have to play. Needless to say, I AM going to see the series now, as I am dying of curiousity to see how the events and characters are portrayed on screen.

What a great start to my year od 100 books! I am definately going to be looking into reading the rest of series that has been published thus far. And inevitably join the hoards of fans frothing at the mouth in their anticipation of book six!

Keep an eye out for my thoughts on the HBO Game of Thrones TV series and the rest of the novels.