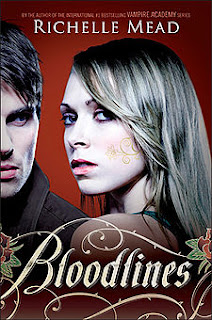 Sydney is an alchemist, one of a group of humans who dabble in magic and serve to bridge the worlds of human and vampires. They protect vampire secrets - and human lives. When Sydney is torn from her bed in the middle of the night, at first she thinks she's still being punished for her complicated alliance with dhampir Rose Hathaway. But what unfolds is far worse. Jill Dragomir - the sister of Moroi Queen Lissa Dragomir - is in mortal danger, and the Moroi must send her into hiding. To avoid a civil war, Sydney is called upon to act as Jill's guardian and protector, posing as her roommate in the last place anyone would think to look for vampire royalty - a human boarding school in Palm Springs, California. But instead of finding safety at Amberwood Prep, Sydney discovers the drama is only just beginning...

This is the second time I have read Bloodlines cover-to-cover. I loved it just as much, if not more so and am now thoroughly engrossed in the sequel, Indigo Spell.

I really enjoy Sydney. She is a contrasting narrator to Rose Hathaway from Vampire Academy. Sydney's sheltered upbringing makes for some amusing moments as she tries to make sense of normal teenager life.

For me, this series is also more developed in a way than Vampire Academy. Sydney bring a lot more to the table and the romance is a lot more understated. Frankly, I got a little tired of Rose telling me how awesome Dimitri is all the time.

The action is minimal in this book, as I feel it is setting the scene for the rest of the series. But don't let that deter you.

I am Team Bloodlines all the way! Keep an eye out for my review of the second book in the series, The Golden Lily.