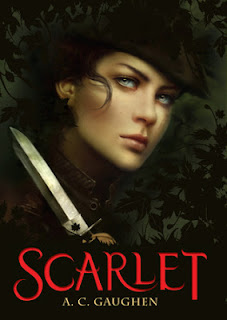 Many readers know the tale of Robin Hood, but they will be swept away by this new version full of action, secrets, and romance.

Posing as one of Robin Hood’s thieves to avoid the wrath of the evil Thief Taker Lord Gisbourne, Scarlet has kept her identity secret from all of Nottinghamshire. Only the Hood and his band know the truth: the agile thief posing as a whip of a boy is actually a fearless young woman with a secret past. Helping the people of Nottingham outwit the corrupt Sheriff of Nottingham could cost Scarlet her life as Gisbourne closes in.

It’s only her fierce loyalty to Robin—whose quick smiles and sharp temper have the rare power to unsettle her—that keeps Scarlet going and makes this fight worth dying for.

I am normally not a fan of retellings (with the exception of Cinder), but Scarlet was a ridiculously fun read.
People who are more fussy with grammar and such than I am might find the style it is written in somewhat irritating as it is told from Scarlet's perspective and her dialect comes through in the narration. However, I found this quite charming and it actually has relevance later on in the story.

Scarlet is filled with action and adventure and is one of those books boys will also enjoy. In a mainly female-targeted YA market, I see this as a huge mark in Scarlet's favour!

Fans of the Robin Hood legend will enjoy the unique plot twists and the setting. It is impeccably researched and this shines in the rich atmosphere Gaughen creates.

For those wanting a break from the typical YA, I cannot reccomend Scarlet enough!