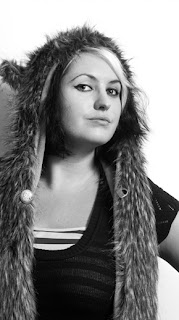 Sally-Ann Partridge is a young adult novelist from Cape Town, South Africa. Her novel, The Goblet Club, won the SABC/You Magazine I am a Writer Competition in 2007, as well as the MER Prize for Best Youth Novel in 2008, an award she won again in 2012 for Dark Poppy’s Demise. Her second novel, Fuse, was selected as an Ibby International Honour Book in 2012.  In the same year she was named as one of the Mail & Guardian’s 200 Young South Africans, a distinction given out annually to notable South Africans under the age of 35. Her fourth novel, Sharp Edges, will hit shelves in August 2013.

Q1: Is there one defining moment when you decided to pursue becoming an author? Are there any particular books or authors that inspired you?

I've known I wanted to write for as long as I can remember. I used to make up stories about imaginary friends and fairies trapped in blowing bubbles long before I first picked up a pen. My parents used to read me stories and encouraged me to make up my own. My dad and I even had a competition to see who could make up the most far-fetched tales. In school I used to write on the back of my exam papers. It was natural for me to write, a necessity.  I read everything that was available to me growing up, and devoured the books my mom bought for herself, so no one author inspired me more than the others. If it was printed I would read it.  I did however, have quite a taste for Christopher Pike and Stephen King as a teenager.
Q2: Why Young Adult? And will you ever step into the adult market?
I wrote what I knew, so most of my stories reflected my own world and characters that were nearer my own age. It wasn't a conscious decision to write young adult fiction. Since discovering that my books fell into that genre I've embraced it. Writing about young people is far more interesting than writing about adults as they're so fearless and resilient, and constantly discovering aspects of themselves that they didn't know existed. I'm quite happy sticking to young adult fiction for the time being.
Q3: What is the most memorable thing a reader has told you regarding one of your novels and why?
I was invited to watch a performance of the stage adaption of my first novel performed by a grade 12 English class and their teacher insisted I come backstage to meet the kids. I was completely blown away by how much the novel had actually affected the kids, and how much they enjoyed reading it. A couple of the kids even came to my next book launch which I was really touched by.
Q4: Are you working on any projects at the moment? And can you elaborate on any details?
My new book, Sharp Edges, comes out in August. It's about six friends that attend a music festival in the Cedarberg, but only five come back. Each chapter is told from the perspective of a different character and explores what they think happened. It's a good old fashioned whodunnit with a contemporary twist. Keep an eye out for the cover reveal and trailer soon.

I just found out that a short story I wrote has been shortlisted for the Commonwealth Writer's Prize, which I'm ridiculously excited about.

The next Bloody Parchment anthology is coming out in June. Local is lekker horror stories including my short story, Jethro Mackenzie and the Devil.
Q5: Any advice you can give to aspiring authors, particularly in the South African market?
Write, write, write,  finish what you started and revise! Finishing a manuscript is only the first step towards publication. Keep going back until your novel shines.

You can purchase Sally's books from Kalahari.com or from her site:
The Goblet Club
Fuse
Dark Poppy's Demise

A big thank you for your time, Sally!
Posted by Monique at 1:32 AM