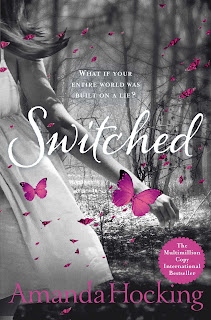 Wendy Everly knew she was different the day her mother tried to kill her and accused her of having been switched at birth. Although certain she’s not the monster her mother claims she is – she does feel that she doesn’t quite fit in...
She’s bored and frustrated by her small town life – and then there’s the secret that she can’t tell anyone. Her mysterious ability – she can influence people’s decisions, without knowing how, or why...
When the intense and darkly handsome newcomer Finn suddenly turns up at her bedroom window one night – her world is turned upside down. He holds the key to her past, the answers to her strange powers and is the doorway to a place she never imagined could exist. Förening, the home of the Trylle.
Finally everything makes sense. Among the Trylle, Wendy is not just different, but special. But what marks her out as chosen for greatness in this world also places her in grave danger. With everything around her changing, Finn is the only person she can trust. But dark forces are conspiring – not only to separate them, but to see the downfall everything that Wendy cares about.
The fate of Förening rests in Wendy’s hands, and the decisions she and Finn make could change all their lives forever... (Goodreads.com)

Switched is one of those books that have been casually sitting on my bookshelf for a long time. I first, oddly, learned about the series from my father. He heard a feature on a local radio station, 702, about Amanda Hocking and the success she attained through self-publishing her novels. I guess my dad still has hopes that I will one day write the next Harry Potter and rake in the millions.

Either way, I was curious and bought a softcover copy of Switched which has now been sitting gathering Johannesburg dust. It wasn't until I found the third book (Ascend) on sale and subsequently bought the second (Torn) that I decided to give this book a shot.

The unfortunate thing is that, while Hocking can write, this book is riddled with so many YA cliches, I might as well just reread Twilight. Ok, wait.That is hardly fair. I did say that Hocking can write while Stephenie Meyer's writing is eye-bleedingly bad.

Some of the cliches include a brooding male lead who claims he's treating the girl like shit for her own good, a female lead who doesn't feel special but SHE IS and dumbed -down secondary characters who are merely filler for the main plot of luuurve.

The plot moved along so slowly and Wendy's confusion and the fact that the other characters kept her in the dark for most of the novel, was very frustrating. I guess that this was some attempt to create tension, but I just couldn't bring myself to care anymore.

I just never felt captivated. If this was that great, I would have continued with the second book. Instead, I felt almost relieved to be able to move on and read something new. However, I did rate it a little higher than this review perhaps indicates, as I did enjoy the writing and think the series could have potential.

I will be reviewing the rest of the trilogy (Tryllogy?) at some stage. Just not for a while. My TBR pile is so large, I suspect other, more favorable books, will work their way to the top!
Posted by Monique at 12:17 AM