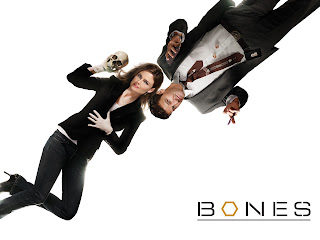 Bones follows Forensic Anthropologist Temperance Brennan (Emily Deschanel) and her team as they assist FBI Agent Seeley Booth (David Boreanaz) in solving murder cases. This series is based on the novels and life of author Kathy Reichs (who is also a Producer of the series).

Now in it's eighth season, Bones has been surprisingly underrated in South Africa.The first season originally aired in 2006 on SABC 3, but the rest of the seasons never aired here. South African's later got another opportunity to watch the show on Top TV's Fox FX channel, where the first four seasons have been aired to date.

Because of this, not many people know of the series. And I feel this is almost bordering on tragic. It happens to many good TV shows. We simply do not have enough channels and prime-time slots and often get shows a few years after they have aired and half the country has acquired illegal copies anyway.

But I am getting off-topic here. Bones has been on my radar for a while. I took the plunge and bought the first season for myself at the end of last year. I watched the first disc and then my father, who loves his NCIS, CSI and the like, smuggled away my box set and devoured the entire season before I had the chance. He then went on to buy season two, which is a nice benefit of getting my father addicted to a TV series!

I got back into the series, introducing it to my boyfriend and watching it with him. The first season flew by extremely quickly! I can see why my dad bought the next season with the way the first ended!

First off, I love the chemistry between Bones and Booth. They are so cute. It reminds of Mulder and Scully back in the days of me fangirling over the X-Files and pasting their faces and "The Truth is Out There" on every notebook I owned. And, like Mulder and Scully, they are COMPLETELY oblivious to this! Just fall in love and have pretty children already!

Bones is a little socially inept and this makes her fun to watch as she tried to engage with people in a human level. Often someone will make a reference to an icon in pop culture and Bones will respond with "I don't know what that means." and then resume her job with no attempt at all to connect. This makes her an oddly endearing lead character! 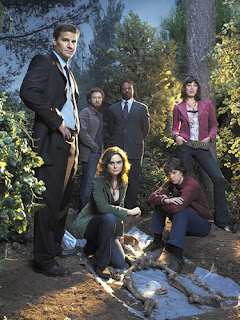 The supporting cast of characters are brilliant. They are all quirky and unique and bring their own flavor to the mix.

The action is certainly not lacking and there are a few twists that keep the audience guessing. Some are predictable while others are completely from left field. And there is a fun humor too. I just love the banter between the characters.

It bears mentioning that each episode of Bones, much like other shows this this genre, focuses on a single case. However, there is an over-arcing plot that starts becoming more prominent later on in the series. So while one can watch the series in any order and still enjoy it, I don't recommend this approach at all! Unlike CSI, the characters are not static vehicles for the mystery to be solved. They grow and develop with time.

I am really enjoying this series and recommend it if you enjoy intelligent TV.

Keep an eye out on this blog! I am going to be rewatching the X-Files and giving my summary and thoughts on each episode. Should be interesting revisiting a series that played such a huge part in my young teenage days.
Posted by Monique at 5:38 AM