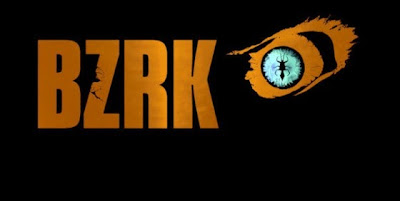 Set in the near future, BZRK is the story of a war for control of the human mind. Charles and Benjamin Armstrong, conjoined twins and owners of the Armstrong Fancy Gifts Corporation, have a goal: to turn the world into their vision of utopia. No wars, no conflict, no hunger. And no free will. Opposing them is a guerrilla group of teens, code name BZRK, who are fighting to protect the right to be messed up, to be human. This is no ordinary war, though. Weapons are deployed on the nano-level. The battleground is the human brain. And there are no stalemates here: It’s victory . . . or madness. (from Goodreads.com)

My previous experience with Michael Grant was a brief flirtation with his Gone series. The first book was brilliant and I was swept up in this whirlwind romance, anxiously awaiting the next one in the series. Which bored me to tears. I know, right? That series has a brilliant reputation for being filled with action and adventure and I just... couldn't.

I was skeptical about BZRK and went in with low expectations. I ended up loving it and was unable to put it down. I was reminded of Matthew Reilly's adult novels where there is just non-stop action and just enough character development for me to be satisfied. It is like a Tom Cruise movie. You know shit's gonna get real quickly.

I loved the concept of battles happening on the nano-level. In our own bodies. The battle scenes are quite thrilling and my only real criticism is that the new recruits, Plath and Keats, didn't really get training. I would have liked that aspect to have been elaborated on before rushing headlong into the main story. It bothered me a little that these two kids suddenly were able to stand on their own and go on complex missions.

I can still highly reccomend this for those of you who need a break from angsty teenage romances and the usual paranormal fare. Just don't go into this expecting a Newberry-worthy read. It's fun, pure escapism that both genders will enjoy.

Also, I caution that this is a mature read. There are the odd sexual references and bad language. I would say this is suitable for ages 15 and up.
Posted by Monique at 3:19 AM