The 5th Wave by Rick Yancy 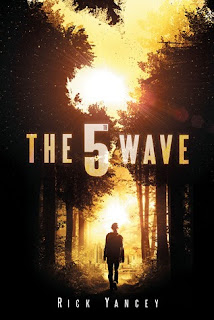 Now, it’s the dawn of the 5th wave, and on a lonely stretch of highway, Cassie runs from Them. The beings who only look human, who roam the countryside killing anyone they see. Who have scattered Earth’s last survivors. To stay alone is to stay alive, Cassie believes, until she meets Evan Walker. Beguiling and mysterious, Evan Walker may be Cassie’s only hope for rescuing her brother—or even saving herself. But Cassie must choose: between trust and despair, between defiance and surrender, between life and death. To give up or to get up (Goodreads).

If you have any sort of presence on the YA bookish interwebs, you will have heard of this book. Comparisons have been made to Ender's Game and The Passage. The big question is... does The 5th Wave live up this hype?

Yes and no. I have never felt more conflicted about a book.

The Positives
The Negatives
All that said, this is a step above most YA and I do reccomend it highly. Just don't expect it to be on par with The Hunger Games.