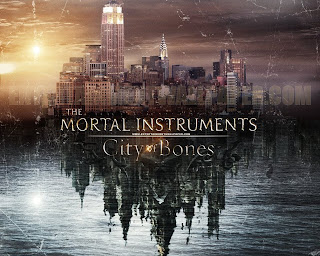 Set in contemporary New York City, a seemingly ordinary teenager, Clary Fray (Lily Collins), discovers she is the descendant of a line of Shadowhunters, a secret cadre of young half-angel warriors locked in an ancient battle to protect our world from demons. After the disappearance of her mother (Lena Headey), Clary must join forces with a group of Shadowhunters, who introduce her to a dangerous alternate New York called Downworld, filled with demons, warlocks, vampires, werewolves and other deadly creatures. Based on the worldwide best-selling book series. Written bySony Pictures Entertainment

I was lucky enough to get tickets to the Johannesburg Premiere of City of Bones. I was a little skeptical, having read some rather scathing reviews online.

I suggest that you approach this review with caution if you don't want anything ruined for you.

However, my feelings ended up being insanely mixed. Here are the good, the bad and the ugly:

The Good
The Bad
The Ugly
My two friends who watched this with me really enjoyed it, saying they liked the whole concept. Neither of them have read the book series, so it does show that non-fans can enjoy the movie as they kept enough storyline and detail in. They would both even go and see the sequel.

I really hope they make a sequel and find a way to make this franchise appeal to a broader audience. I did enjoy this for what it was worth and thought, in spite of some plot butchering here and there, the movie remained somewhat faithful to the characters.

City of Bones is being released 13th of September 2013 countrywide.