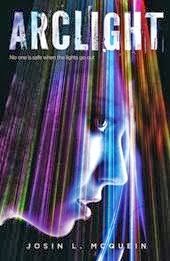 A big thank you to Penguin Books SA for the review copy.

No one crosses the wall of light . . . except for one girl who doesn’t remember who she is, where she came from, or how she survived. A harrowing, powerful debut thriller about finding yourself and protecting your future—no matter how short and uncertain it may be.

The Arclight is the last defense. The Fade can’t get in. Outside the Arclight’s border of high-powered beams is the Dark. And between the Light and the Dark is the Grey, a narrow, barren no-man’s-land. That’s where the rescue team finds Marina, a lone teenage girl with no memory of the horrors she faced or the family she lost. Marina is the only person who has ever survived an encounter with the Fade. She’s the first hope humanity has had in generations, but she could also be the catalyst for their final destruction. Because the Fade will stop at nothing to get her back. Marina knows it. Tobin, who’s determined to take his revenge on the Fade, knows it. Anne-Marie, who just wishes it were all over, knows it.

When one of the Fade infiltrates the Arclight and Marina recognizes it, she will begin to unlock secrets she didn’t even know she had. Who will Marina become? Who can she never be again?

I was so thrilled when my copy of Arclight arrived in the mail. I had been drawn to this title for months thanks to that stunning cover and generally favourable reviews on other blogs.

I settled down to read Arclight and was immediately drawn into the writing and the world McQuein created. And the writing! It is polished and does not read like a first novel. The brilliant way things are described created a movie inside my head. I could picture everything from the setting to the mysterious Fades.

I think it is this that really makes Arclight stand out. A lot of YA is thrown into the market with the hopes that something will stick and become The Next Big Thing. Often quality tends to suffer and the books are poorly written or edited. Arclight is polished. It is not too long and there is enough action and story development to keep you turning the pages to find out what happens next.

Marina is a strong character in spite of her flaws and she stands up for what she feels is right and follows through on her intentions. Tobin could have been better developed, but at least he is more real than a lot of YA love interests out there.

There is an interesting plot twist that sets the reader up for the next title in the series, Meridian. It was also unpredictable and completely took me by surprise.

Email ThisBlogThis!Share to TwitterShare to FacebookShare to Pinterest
Labels: sci-fi, thriller, YA