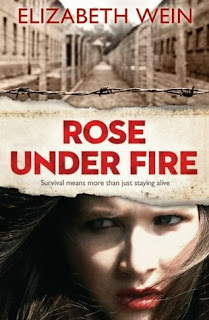 While flying an Allied fighter plane from Paris to England, American ATA pilot and amateur poet, Rose Justice, is captured by the Nazis and sent to Ravensbrück, the notorious women's concentration camp. Trapped in horrific circumstances, Rose finds hope in the impossible through the loyalty, bravery and friendship of her fellow prisoners. But will that be enough to endure the fate that’s in store for her?

Firstly, I strongly suggest you read Code Name Verity first before this one. It contains major spoilers.

I absolutely loved Code Name Verity and was very excited when I heard about the release of Rose Under Fire, which is essentially a companion novel to Verity.

The writing is beautiful and it is amazing how well Wein depicts the time in which this novel is set. There are a few slip-ups that I noticed in terms of slang and such, but otherwise it is absolutely perfect.

The novel starts with Rose telling us about her adventures as a transport pilot for the Allies and her relationships with the other pilots. The aviation lingo and details are spot on, as Wein herself is a pilot.

Then Rose's bubble is burst as she is taken captive flying a craft back to England by two Luftwaffe pilots. She is sent to the women's concentration camp, Ravensbruck, where she is exposed to the atrocities that were committed to thousands upon thousands of others under the Nazi regime.

Rose forges friendships and alliances and uses her wits to survive.

The story is told in the form of Rose's notebook interspersed with her poems. Most of it is told in retrospect, with Rose remembering all that happened as she sits in her hotel room in France. This makes for an interesting narrative!

There are a lot of surprises and some parts that made me a little emotional. Feelings of hatred and love. You cannot help but feel for some of the characters and root for them!

This is such a relevant novel. While it is a work of ficition, Ravensbruck and the experiements and torture the prisoners went through is real. It is a part of history that perhaps a novel like this can only best depict to new generations. Other than first-hand accounts from survivors!

This is an outstanding read that rises above a romance-saturated YA market. Please read it. You will not regret it.
Posted by Monique at 7:26 AM