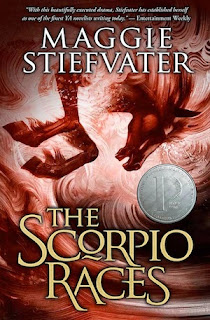 It happens at the start of every November: the Scorpio Races. Riders attempt to keep hold of their water horses long enough to make it to the finish line. Some riders live. Others die.

At age nineteen, Sean Kendrick is the returning champion. He is a young man of few words, and if he has any fears, he keeps them buried deep, where no one else can see them.

Puck Connolly is different. She never meant to ride in the Scorpio Races. But fate hasn’t given her much of a chance. So she enters the competition — the first girl ever to do so. She is in no way prepared for what is going to happen.

After thoroughly enjoying the Wolves of Mercy Falls trilogy, I was eager to pick up The Scorpio Races. Even more so when I found out it was about horses. Granted, carnivorous horses who lived in the ocean and would not hesitate to drag their rider to their watery deaths. But still. Beggars cannot be choosers and there are simply not enough horsey YA books out there.

The Scorpio Races is less about the race and more about the relationships between the people of Thisby, the fictional island that this novel is set on. And that is what sets this apart from other YA int the market. Stiefvater has such a flair for writing characters. They feel so real, that it is not impossible to imagine I know them.

Each islander has a role to play in the unfolding of the story and, unlike Mercy Falls, the romance takes a backseat to characters overcoming their personal obstacles.

I have said this before, but I do so love Stiefvater's writing style, Some bloggers are critical of her prose, calling it "flowery" but I disagree. She tells a good story and she does it succinctly. There is not a word out of place and the story flows as it should.

Steifvater also improves from book to book. I feel that Shiver was simply getting her name out there and catering to the Twilight crowd while she really hits her stride with The Scorpio Races. I also noticed this with The Raven Boys, which is even better! (Review coming soon!)

This book is rich in atmosphere. I could almost smell the salty sea air and feel the heat rising off the flanks of the water horses. I felt like I was THERE.

If you want to read a good standalone YA that doesn't require the laboriousness of a trilogy, give this one a go. It's different and something that will always hold a special place on my shelf. A book I hope to share with my kids one day.
Posted by Monique at 3:11 AM

Email ThisBlogThis!Share to TwitterShare to FacebookShare to Pinterest
Labels: YA