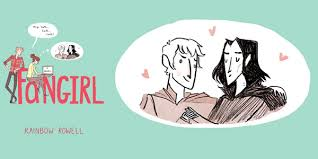 Cath is a Simon Snow fan.

But for Cath, being a fan is her life — and she’s really good at it. She and her twin sister, Wren, ensconced themselves in the Simon Snow series when they were just kids; it’s what got them through their mother leaving.

Reading. Rereading. Hanging out in Simon Snow forums, writing Simon Snow fan fiction, dressing up like the characters for every movie premiere.

Cath’s sister has mostly grown away from fandom, but Cath can’t let go. She doesn’t want to.

Now that they’re going to college, Wren has told Cath she doesn’t want to be roommates. Cath is on her own, completely outside of her comfort zone. She’s got a surly roommate with a charming, always-around boyfriend, a fiction-writing professor who thinks fan fiction is the end of the civilized world, a handsome classmate who only wants to talk about words . . . And she can’t stop worrying about her dad, who’s loving and fragile and has never really been alone.

For Cath, the question is: Can she do this?

Can she make it without Wren holding her hand? Is she ready to start living her own life? Writing her own stories?

And does she even want to move on if it means leaving Simon Snow behind?

I first read Fangirl in one sitting on my trusty Kobo eReader. I loved it so much that when I found a physical copy in Exclusive Books I HAD to own it. So I could obsessively sniff the pages and skip to all my favourite parts.

Rainbow Rowell has a way of telling a story. Like many authors I love, her characters are almost real to me. I care about them so deeply by the end of the book I am reluctant to let them go and move on with my life.

Fangirl also has a different appeal. I AM Cath in so many ways. I can relate to her character enormously. From the writing of fan fiction to using fantasy worlds as a substitute for reality... yes. And I love how the supporting cast of characters each has their part in bringing Cath out of her reclusive shell.

Simon Snow is brilliant. Basically he is the Fangirl equivalent of Harry Potter and the similarities, while a bit glaringly obvious at times, are also quite clever. It is not a stretch to expand on the snapshots we have of this fictional series and by the end of the book, I had to remind myself that Simon and his vampire cohort, Baz, don't have their very own books I can explore.

I accept that Fangirl is not for everyone and that you might not relate like I did to the characters and story. But there is a very good reason this book has seen the success it has.