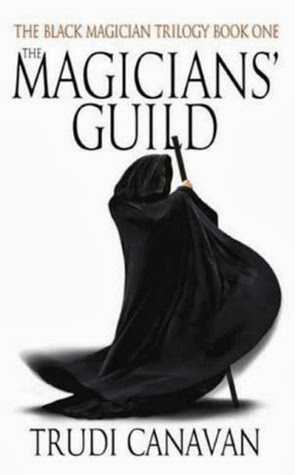 This year, like every other, the magicians of Imardin gather to purge the city of undesirables. Cloaked in the protection of their sorcery, they move with no fear of the vagrants and miscreants who despise them and their work-—until one enraged girl, barely more than a child, hurls a stone at the hated invaders...and effortlessly penetrates their magical shield.

What the Magicians' Guild has long dreaded has finally come to pass. There is someone outside their ranks who possesses a raw power beyond imagining, an untrained mage who must be found and schooled before she destroys herself and her city with a force she cannot yet control.

I first discovered this series in 2005 and have reread it several times since then.

If you are unfamiliar with Trudi Canavan's work, this is the perfect starter Fantasy that will appeal to teens and adults. It has an appealing world with an uncomplicated storyline and the characters are well-crafted.

The Magician's Guild is my least favourite of the trilogy, but that is simply because it acts as a stepping stone into this world and sets the scene for the next two books. Canavan's world building is flawless. she does not waste words on long-winded descriptions unlike some more prominent authors of the genre. I appreciate this, as I do not need a full chapter describing the scene. I would rather be told as the story progresses.

The writing is succinct and the point of view moves around from chapter to chapter. It is fun to see the various relationships play out, especially where Dannyl is involved!

If you have not read this wonderful series, do. And then pass along to your kids. However, fans of High Fantasy may find this series slightly fluffy.