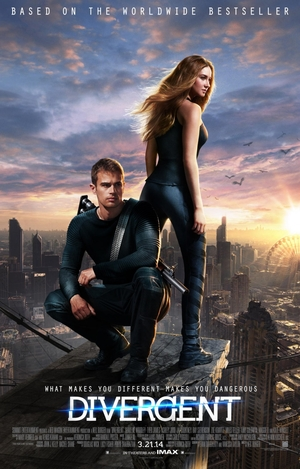 I was lucky enough to go to the opening night screening of Divergent thanks to Jonathan Ball Publishers (Local distributors of the book series) and Skoobs Theatre of Books.

I have been anticipating this movie for MONTHS but also didn't get my hopes up too high as the YA genre has a pretty shitty history of being translated into film well. From what I had seen online, I was happy with the casting choices and the general feel of the film, but we fans are a fickle, picky lot who are hard to please.

After meeting the other winners of the Skoobs competition, I pulled on my Candor bracelet, grabbed popcorn and coke and settled in for a 2 hour trip into the world of the best-selling novels I had come to love.

Firstly, the one thing that really impressed me was the movie score and soundtrack. There was a lot of Ellie Goulding, which was a great choice of artist for the film as she has already tapped roots into the right audiences and is edgy enough to fit the atmosphere and feel of the film. The score was composed by Han Zimmer, who is one of my favourite composers of all time. You may remember the name from films such as The Lion King and Batman Begins, which has sweeping, epic scores. He delivers more of the same with Divergent, giving the film that little bit extra.

Shailene Woodley was cast as Tris and did an admirable job, although she will never be Jennifer Lawrence. I look forward to seeing her in the role of Hazel in The Fault in Our Stars later this year.

Theo James was great at Four and he had his shirt off enough for me not to mind if he was the world's worst actor.

For those who have not read the books, Divergent provides enough information for them not to be left in the dark. My boyfriend even enjoyed it and seemed to have a grasp of the plot. He commented on it being filmed well and the settings, although he thought the movie could have been more dark and brutal.

I tend to agree. The book was a lot darker and they left out or dumbed down a lot of brutality the Dauntless initiates went through. This was probably to ensure the movie hit it's PG rating.

I wish Peter's character had been focused on more. he played an important role in the books and he was dealt with in a cursory way. Plus the actor who they cast in the role was too soft and weak-looking. I did not see Peter like that at all!

I won't go into THE scene that has everyone talking. That is been discussed on other blogs and reviews.

Overall, Divergent was a brilliant adaption and I am pleased to say that I enjoyed it even more than The Hunger Games, as the story and setting was so well-done. It is polished and didn't feel rushed or cheapened.

If you are a fan, I am sure you will not leave the cinema disappointed.
Posted by Monique at 4:52 AM

Email ThisBlogThis!Share to TwitterShare to FacebookShare to Pinterest
Labels: dystopian, movie review, YA