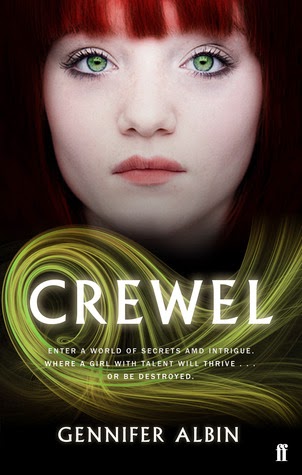 That’s what the other girls whisper behind her back. But sixteen-year-old Adelice Lewys has a secret: She wants to fail.

Gifted with the ability to weave time with matter, she’s exactly what the Guild is looking for, and in the world of Arras, being chosen to work the looms is everything a girl could want. It means privilege, eternal beauty, and being something other than a secretary. It also means the power to manipulate the very fabric of reality. But if controlling what people eat, where they live, and how many children they have is the price of having it all, Adelice isn’t interested.

Not that her feelings matter, because she slipped and used her hidden talent for a moment. Now she has one hour to eat her mom’s overcooked pot roast. One hour to listen to her sister’s academy gossip and laugh at her dad’s jokes. One hour to pretend everything’s okay. And one hour to escape.

Because tonight, they’ll come for her.

Crewel is defined as: Embroidery, or Crewelwork, is a type of crochet embroidery using wool and a variety of different embroidery stitches to follow a design outline applied to the fabric (Wikipedia). This is an actual art form that Albin has adapted for this novel. Clever, as I originally thought the novel was simply called that as a deliberate misspelling of the word "Cruel".

I really enjoyed this one. It is original and polished, with a swift narrative that kept me guessing.

Part of me could have done without the romance, as Adelice has strong enough relationships with other characters. It seems to be too much to ask for a great YA novel that doesn't rely on romance to draw in a readership.

This is a strong enough novel and concept on its own. I really liked the world Albin has created as deftly as her characters work the weave in their own world.

I look forward to the next in the series, Altered.