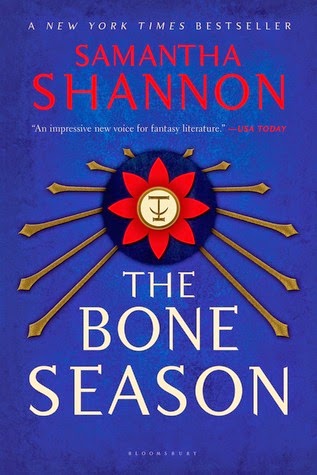 It is the year 2059. Several major world cities are under the control of a security force called Scion. Paige Mahoney works in the criminal underworld of Scion London, part of a secret cell known as the Seven Seals. The work she does is unusual: scouting for information by breaking into others’ minds.Paige is a dreamwalker, a rare kind of clairvoyant, and in this world, the voyants commit treason simply by breathing.

But when Paige is captured and arrested, she encounters a power more sinister even than Scion. The voyant prison is a separate city—Oxford, erased from the map two centuries ago and now controlled by a powerful, otherworldly race. These creatures, the Rephaim, value the voyants highly—as soldiers in their army.

Paige is assigned to a Rephaite keeper, Warden, who will be in charge of her care and training. He is her master. Her natural enemy. But if she wants to regain her freedom, Paige will have to learn something of his mind and his own mysterious motives. (Off Goodreads.com).

I have been caught up in the hype surrounding this book, the first of a series. I waited ever so patiently to purchase a mass-market paperback copy as I don't enjoy the heavy trade paperbacks and find they take up waaaaay to much precious shelf space.

I didn't tuck into Bone Season right away, rather letting it mellow on my shelf for a few weeks. I felt that, if this book met the hype, I wanted to really savour the experience of reading it for the first time.

Well, Bone Season certainly was worth setting aside the time for.

Firstly, the author is a master at building a concrete world for her characters to have their adventures in. It is fresh and I loved the clairvoyance concept.

Paige is a strong-willed main character who follows in the wake of Katniss and Tris. She is capable and does not rely on anyone else to save her. I love this and we need more heroines like her in YA.

And, yes, this is YA. I have to go off track here on a bit of a tangent. Most of you know I live in South Africa, where we are somewhat less exposed to global hype surrounding books. As far as I am aware, this is a Young Adult novel that could be crossed over into the Adult section of bookstores. However, your average adult reader is NOT going to pick this one up unless they already love Hunger Games et al.

So why, for the love of all that is good, is this shelved as Adult Fiction? Is it any surprise that most bookstores only stock one or two copies if that? Of course the book is not going to sell unless it is correctly merchandised! I do not know why, but it seems to be across all bookstores. Perhaps it has been incorrectly merchandised on the system or incorrectly marketed. Either way, shelve this in YA and I am sure the sales of this title will rise dramatically!

I love The Bone Season so much that I feel as if it is being done an injustice. Merchandising is everything.

So, please do get a copy of this if you love the other titles I have mentioned here. It is something new that does not rely on romantic tropes to carry the plot through. It has a brave heroine and a great, well-conceived world. Just do it. Read it. And thank me later. :)