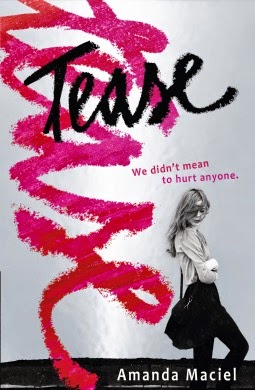 Emma Putnam is dead, and it's all Sara Wharton's fault. At least, that's what everyone seems to think.

Sara, along with her best friend and three other classmates, has been criminally charged for the bullying and harassment that led to Emma's shocking suicide. Now Sara is the one who's ostracized, already guilty according to her peers, the community, and the media. In the summer before her senior year, in between meetings with lawyers and a court-recommended therapist, Sara is forced to reflect on the events that brought her to this moment—and ultimately consider her own role in an undeniable tragedy. And she'll have to find a way to move forward, even when it feels like her own life is over.

I recieved a review copy of this novel in exchange for an honest review from PanMacmillan South Africa. Thank you!

Tease is one of those books that I would never have picked up had I found it in the shops. It does not meet my usual checklist of things that drives me to purchase a book (supernatural, dystopian, fantasy, sci-fi). But, I was pleasantly surprised by Tease.

Told from the point of view of a bully, it brings to light just how awful the high school experience can be. The peer pressure of fitting in, having a hot guy, being in the "cool" group of girls. Do not expect to like Sara. She is an awful person initially and she is supposed to be awful.

I think this is an interesting read in that it highlights some of the major problems found in schools today. It is also a difficult book to digest, especially if you have been at the brunt of high school nastiness yourself.

The writing is not bad and I do like how the story alternates between the past and the present. I would have liked Sara to have grown more as a person, though.

Well worth the read if you want something a little different and are tired of mainstream YA.

Email ThisBlogThis!Share to TwitterShare to FacebookShare to Pinterest
Labels: comtemporary, YA