Review: A Thousand Pieces of You 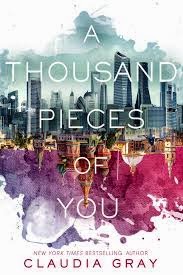 Marguerite Caine’s physicist parents are known for their radical scientific achievements. Their most astonishing invention: the Firebird, which allows users to jump into parallel universes, some vastly altered from our own. But when Marguerite’s father is murdered, the killer—her parent’s handsome and enigmatic assistant Paul—escapes into another dimension before the law can touch him.

Marguerite can’t let the man who destroyed her family go free, and she races after Paul through different universes, where their lives entangle in increasingly familiar ways. With each encounter she begins to question Paul’s guilt—and her own heart. Soon she discovers the truth behind her father’s death is more sinister than she ever could have imagined.

You ever have that experience where you are browsing through the shelves of your  local bookstore and you find a book cover that is to gorgeous that you simply have to own the book now?

This was pretty much that for me with this book. I mean, look at that cover! Just look at it. Complete perfection.

Just a damned pity the book didn't live up it its promises.

Firstly, this books reads like a while entire volume preceded it. We are thrown directly into the action and are expected to give two shits about our protagonist without a proper introduction. Completely unfair of the author, if you ask me. Oh you get backstory. Shuffled between the present and far too late for me to actually care.

There is also the niggling issue that what could have been a brilliant concept (inter-dimensional travel) is turned into a mushy love fest.

I also could not shake the feeling that Marguerite is far more concerned about her little love triangle than finding out who her father's killer is. She actually does not seem too bothered about the whole situation once the hormones kick in.

Honestly, don't be fooled by the pretty cover. This is badly written, poorly conceived rubbish wrapped in a nice package.
Posted by Monique at 11:52 PM

Email ThisBlogThis!Share to TwitterShare to FacebookShare to Pinterest
Labels: letdowns, YA