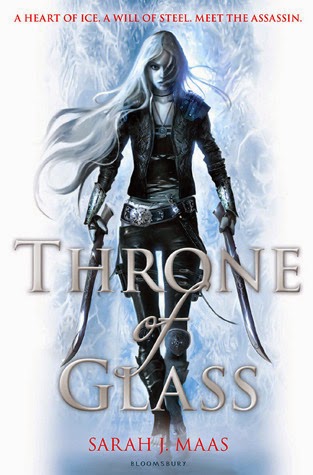 After serving out a year of hard labor in the salt mines of Endovier for her crimes, 18-year-old assassin Celaena Sardothien is dragged before the Crown Prince. Prince Dorian offers her her freedom on one condition: she must act as his champion in a competition to find a new royal assassin. Her opponents are men-thieves and assassins and warriors from across the empire, each sponsored by a member of the king's council. If she beats her opponents in a series of eliminations, she'll serve the kingdom for three years and then be granted her freedom.

Celaena finds her training sessions with the captain of the guard, Westfall, challenging and exhilarating. But she's bored stiff by court life. Things get a little more interesting when the prince starts to show interest in her... but it's the gruff Captain Westfall who seems to understand her best.

Then one of the other contestants turns up dead... quickly followed by another.
Can Celaena figure out who the killer is before she becomes a victim? As the young assassin investigates, her search leads her to discover a greater destiny than she could possibly have imagined. (Goodreads.com)

I have been meaning to read this series for a while due to the great things I had been hearing about it on other blogs and social media.

I am so glad I picked this one up. I am a big fan of uncomplicated fantasy that is rapidly paced with a strong female lead, much like the Black Magician trilogy by Trudi Canavan. Like Canavan's series, Mass does not waste time with useless prose and delivers a great story.

In fact, I would say that this is even better, as Celaena is a great character with an interesting past. She also brings extra appeal to the story as one is never quite sure what she will do next.

There is romance and I found myself rooting for the so-so-sexy underdog, Captain Westfall.

What I love with this book is that Maas does not rely on tropes and tired stereotypes. Each character feels fresh and new and they bring something new to the story. Even Prince Dorian is not your typical Princely character.

Love, love, love it. You cannot go wrong if you are looking for thoughtful YA Fantasy.
Posted by Monique at 6:38 AM

Email ThisBlogThis!Share to TwitterShare to FacebookShare to Pinterest
Labels: books, Fantasy, YA