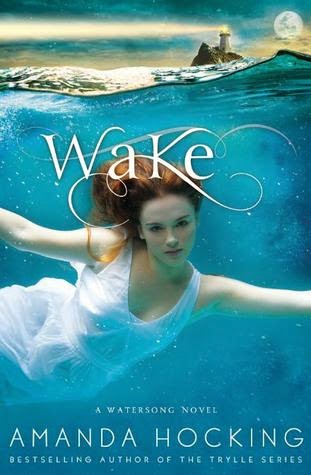 Gemma seems to have it all—she’s carefree, pretty, and falling in love with Alex, the boy next door. He’s always been just a friend, but this summer they've taken their relationship to the next level, and now there’s no going back. Then one night, Gemma’s ordinary life changes forever. She’s taking a late night swim under the stars when she finds Penn, Lexi and Thea partying on the cove. They invite her to join them, and the next morning she wakes up on the beach feeling groggy and sick, knowing something is different.
Suddenly Gemma is stronger, faster, and more beautiful than ever. But her new powers come with a terrifying price. And as she uncovers the truth, she’s is forced to choose between staying with those she loves—or entering a new world brimming with dark hungers and unimaginable secrets.

I really did not like the first in the Trylle series by Amanda Hocking. The whole novel felt like all the YA tropes had been tied together and the main character was basically a super-special Mary Sue type. I decided to give Wake a bash as I live in hope that authors can improve and do not write off all their work based on one novel.

This one is certainly better, but I still had some problems with it. That does not take away from it being a light, fun read, just perfect for the weekend or relaxing by the pool.

I enjoyed the mythology of the sirens that Hocking explores in this series. She goes into a bit of detail regarding their backstory and I was pleased that I didn't have the feeling of having read something similar before. That is quite a feat with YA these days as everyone wants to be the next TFIOS / Hunger Games / Twilight.

What really fell flat for me were the characters, They didn't really have anything distinctive about then other than those characteristics that were told and not shown. I did not connect to Gemma at all and found that she was more of an irritation than anything else. Her romance is terribly forced and I felt was simply put in there because the author felt that it had to be present. Why she could not have had just a big adventure without falling in love in the first 50 pages, I simply do not know.

I much preferred her sister, Harper, who felt a lot more well-rounded as a character. Plus her little romantic interactions were possibly my favorite part of the story. Daniel is a ridiculous flirt and Gemma is so awkward about it. It's adorable.

I hope Harper gets more attention in the next few books. I really do.

The pacing was also an issue for me, albeit a minor one. I think authors feels the need to drag their stories out so they can pump out more books. Not a whole hell of a lot happened in Wake. But perhaps it is just setting up for things to come.

Having had my gripes, I will read the others in this series. I love the sirens. I love Harper. I want to see where the story goes.

I recommend this for a quick weekend read. But do not expect too much depth and complexity.
Posted by Monique at 12:54 AM

Email ThisBlogThis!Share to TwitterShare to FacebookShare to Pinterest
Labels: mythology, romance, YA