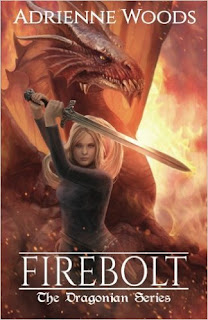 Dragons. Right. Teenage girls don’t believe in fairy tales, and sixteen-year old Elena Watkins was no different.
Until the night a fairy tale killed her father.
Now Elena’s in a new world, and a new school. The cutest guy around may be an evil dragon, a Prince wants Elena’s heart, and a long dead sorcerer may be waking up to kill her. Oh. And the only way Elena’s going to graduate is on the back of a dragon of her own.
Teenage girls don’t believe in fairy tales. Now it’s time for Elena to believe – in herself.

I really enjoyed the fast pace of the story and how it honestly was not like a lot of other YA's a have read. Woods has created a unique universe with fan characters and great dialogue.

You get the feeling that she is setting the scene for something awesome to follow in the next few books and Elena is a likable character who really grows as she learns about her heritage and the history of the world she finds herself thrown into.

My only criticism is the few formatting errors and typos, but this does not detract from the great story. And this touches on something that a lot of other bloggers and critics miss. You can hide a bad story with flowery prose, but a good story will find its' audience in spite of cosmetic flaws.

Give this one a shot and support local authors!
Posted by Monique at 7:53 AM