Review: The Girl at Midnight by Melissa Grey 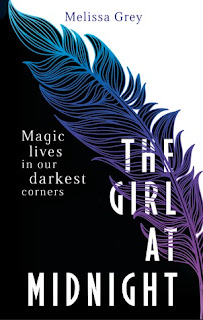 Beneath the streets of New York City live the Avicen, an ancient race of people with feathers for hair and magic running through their veins. Age-old enchantments keep them hidden from humans. All but one. Echo is a runaway pickpocket who survives by selling stolen treasures on the black market, and the Avicen are the only family she's ever known.

Echo is clever and daring, and at times she can be brash, but above all else she's fiercely loyal. So when a centuries-old war crests on the borders of her home, she decides it's time to act.

Legend has it that there is a way to end the conflict once and for all: find the Firebird, a mythical entity believed to possess power the likes of which the world has never seen. It will be no easy task, though if life as a thief has taught Echo anything, it's how to hunt down what she wants . . . and how to take it.

But some jobs aren't as straightforward as they seem. And this one might just set the world on fire.

So I read this one a while back and totally forgot to review it.

This is one of those reads that will remind you of other books, so brace yourself for that. However, you should not be discouraged from picking this up anyway.

Melissa Grey has such an enchanting way of telling her story. I loved that her world-building was not just superficial fluff and I bought into the history of her characters.

Echo is really sassy and her interactions with the rest of the cast of characters are thoroughly entertaining.

While this does not quite match up to the glory that is A Daughter of Smoke and Bone, a book if often gets compared to, I highly recommend giving it a try for a fun weekend read.

The sequel, The Shadow Hour, is due out in July this year.
You can follow Melissa on Twitter at @meligrey.
Posted by Monique at 2:43 AM

Email ThisBlogThis!Share to TwitterShare to FacebookShare to Pinterest
Labels: books, Urban Fantasy, YA