Theatre: Queen: It's a Kinda Magic

I was privileged enough to attend the opening night of the epic Queen tribute show, It's a Kinda Magic, at Joburg Theatre last night.

I am a huge fan of Queen and some of my earliest memories related to music are associated with them. I remember when my parents broke the news about Freddie Mercury's death and how heartbroken I was. My seven year old self had big dreams of meeting the band one day.

I knew that, along with iconic bands like Nirvana, I would never be able to see Queen live and had come to terms with that, instead watching and rewatching music videos and their brilliant performances at Wembley Stadium and Live Aid.

When I heard about this show, I was cautiously excited. It takes a singer with real chutzpah to try and sing a Queen song let alone do justice to their legacy.

Bearing in mind I had also seen We Will Rock You when the international cast toured a good decade or more back. I had that experience in mind, as the vocalists honestly were not fantastic, though I did love the show overall. 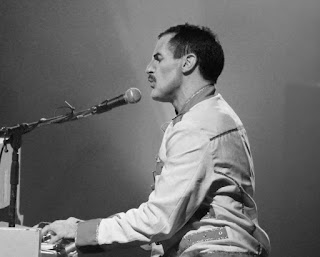 While the first song was a little shaky due to sound issues, Taylor quickly hit his stride and I was completely drawn in. At times, his voice and inflections were so close to Freddie that it was almost easy to forget we weren't in 1985 seeing the master himself perform. And the show was staged perfectly, with the lighting and overall feel of a Queen performance in their heyday.

I am not going to give any spoilers regarding their setlist, bust rest assured all the favorites and a few surprises are there.

Queen: It's a Kinda Magic is worth watching and runs until the 7th February 2016 so grab your tickets now.

The Theatre does has a restaurant, Stages, which is very reasonably priced and drinks and snacks are available during intermission. There is also some awesome merchandise available for purchase.
Posted by Monique at 1:54 AM