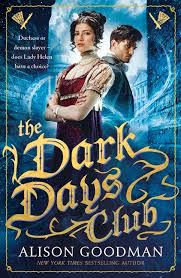 London, April 1812.
On the eve of eighteen-year-old Lady Helen Wrexhall’s presentation to the queen, one of her family’s housemaids disappears-and Helen is drawn into the shadows of Regency London.
There, she meets Lord Carlston, one of the few who can stop the perpetrators: a cabal of demons infiltrating every level of society. Dare she ask for his help, when his reputation is almost as black as his lingering eyes? And will her intelligence and headstrong curiosity wind up leading them into a death trap?

This is yet another review book that completely took me by surprise. I might have been drawn to that gorgeous cover, but I would probably have quickly set it back on the shelf in favour of other books.

I just have this weird repulsion for Regency books. I tried Gail Carriger's Parasol Protectorate series but it just never really grabbed me. Though that had the Steampunk element tossed in too.

Dark Days Club, however, is an oddly compelling story. This in spite of pacing problems and a whole lot of not much going on in the first half.

Helen is charming and feisty for her day and age. Her observations of others are thoroughly entertaining and amusing to read and I adore her strong loyalty to those she holds dear.

I also felt like this book was so immersed in the setting and time-frame that there was little doubt in my mind that Goodman had researched every single element to the nth degree. It was actually rather refreshing to not question the authenticity of the world that is being presented to myself as a reader.

So if you don't mind a plot that simmers more than boils and you have a thing for great characters and settings, give this one a try!
Posted by Monique at 6:28 AM No comments:

Email ThisBlogThis!Share to TwitterShare to FacebookShare to Pinterest
Labels: Fantasy, romance, YA 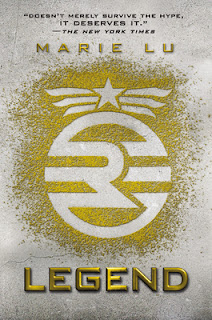 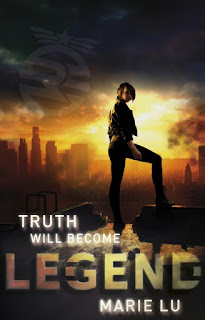 What was once the western United States is now home to the Republic, a nation perpetually at war with its neighbors. Born into an elite family in one of the Republic's wealthiest districts, fifteen-year-old June is a prodigy being groomed for success in the Republic's highest military circles. Born into the slums, fifteen-year-old Day is the country's most wanted criminal. But his motives may not be as malicious as they seem.

From very different worlds, June and Day have no reason to cross paths—until the day June's brother, Metias, is murdered and Day becomes the prime suspect. Caught in the ultimate game of cat and mouse, Day is in a race for his family's survival, while June seeks to avenge Metias's death. But in a shocking turn of events, the two uncover the truth of what has really brought them together, and the sinister lengths their country will go to keep its secrets.

So I actually originally read this one two years ago and recently reread it to prepare to finish the trilogy. Embarrassingly, I see I have neglected to review it so this is going to be a bit of a mix of my original impression and my thoughts after the reread.

I also included two covers on this post as my edition is the cover on the right, which was replaced by the cover on the left when the book was reprinted in mass market paperback in the UK. I actually kinda like the original UK cover, even though it reminds me of Divergent.

Legend is a pretty standard YA dystopian, with a decently paced story and interesting characters, What I did appreciate was that Marie Lu didn't drown us in the romance aspect of the plot, but chose to run that as a side plot while she focused on the characters themselves.

June is pretty awesome. She is capable and conflicted and completely a deserving leading lady. I love that she is so mature, and yet still every bit a teenager.

Day is a bit of a cliche, however I do like him and is fierce, caring nature.

So while not entirely original, I did enjoy this a lot!

I am not going to reveal much more, as I think this is a worthy read for YA fans who love Hunger Games and Divergent.

I have also finished Prodigy, the next in the series, and will be putting my thoughts up shortly.

Posted by Monique at 6:09 AM No comments: