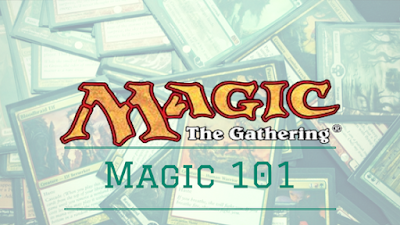 So you have seen these posts on my blog. You may have seen the odd mention of Magic on some of my Social Media and, if you have never touched the game before, you are probably wondering what the hell it actually is.

It is really hard to pick a single focal point to start this series of blog posts off with, but I think a basic walkthrough of how the game works as well as the various phases of play will hopefully make sense to new players.

What is Magic?
In a nutshell, Magic is a card game where you face-off against an opponent with a 60 card deck. You can have more cards, but 60 is the recommended amount to keep your deck as consistent as possible.

Each player starts with a life total of 20. The objective is to win by casting spells (cards) which cause them to lose all their life or to draw all their cards. One either of these things happen, you win the game.

A deck consists of creature cards, other spells which you can play at specific times and your lands (mana base), which allow you to cast limited spells per turn. I will go into more detail on these in a later post. 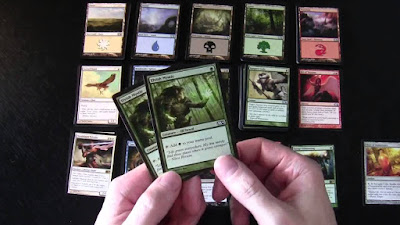 Starting a Game
Each player shuffles their deck and rolls a 20-sided die to determine who starts the game. The person with the highest roll can decide if they start or of their opponent starts. There are advantages to both options as you may want to get the extra card draw or have an extra land in play.

Players then cut each other's decks by dividing them in two or doing a shuffle and then the game starts.

The player who starts does not get to draw a card and they then follow the normal phases of a turn. The player going second does get to draw at the start of their turn.

Untap Phase
Before anything else happens, at the start of each player's turn, the player must untap all cards which had been tapped in the previous turn.

Cards are tapped for abilities and this then exhausts them, meaning the card is essentially out of play until the next turn. Untapping cards essentially replenishes them for use in your turn.

Upkeep Phase
Before a player draws a card, some of the cards may have abilities that kick off at the start of that turn. These abilities must be resolved before a card is drawn.

Draw Phase
This is where the top card from your deck or library is drawn and added to your existing hand.

This is not optional and each player must draw a card, regardless of hand size at that time. Sometimes, there are cards with abilities that allow an extra card to be drawn.

First Main Phase
This is the phase where you play a land card if possible. This is limited to one per turn unless an ability permits additional land to be played.

This is also the phase where you cast sorceries, play enchantments and bring your creature minions into play. Creature cards, unless they have the "haste" ability, cannot attack in the turn they have been summoned. 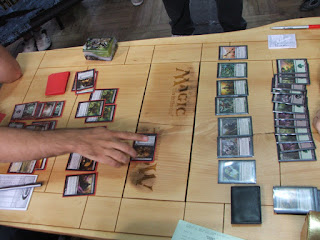 Combat Phase
This phase is optional as you might decide you would like to hold your creatures back to block your opponent in their next turn.

You declare which creatures will be attacking and then your opponent will have an opportunity to disrupt the attack with spells or designate creatures as blockers.

This then resolves and damage goes off the opponent's life total and any creatures who have died are removed from the game to the graveyard.

Second Main Phase
This gives you the chance to cast more cards if possible before closing your turn.

End Phase
If you hand size if over seven at this stage, you then have to discard as many cards as necessary to get it back to seven cards.

Obviously, Magic is a LOT more complicated than this and I will cover many more aspects of the game in weeks to come.

You can also check out an interview with one of South Africa's Pro players, Jason Ward, and get some advice from him on getting into the game.