Opinion: On 13 Reasons Why and Media Responsibility 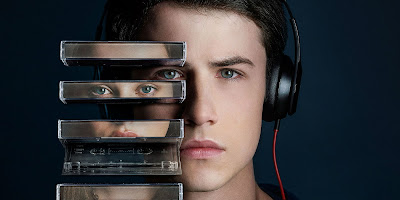 SPOILERS AHEAD - do not read further if you still want to see the show and are worried about having anything ruined for you!

If you have been hanging around Twitter and other Social Media lately, you would have seen the hype surrounding Netflix's latest supershow, 13 Reasons Why.

13 Reason's Why is based on the 2007 novel by Jay Asher. It was originally optioned for tv in 2015 and had Selena Gomez (yes, that Selena Gomez) as an Executive Producer. It focuses on the suicide of high school teen, Hannah Baker, who leaves behind tapes in which she explains her reasons for why she killed herself. She holds select individuals at her high school responsible and goes into detail on the series of events which ultimately lead to her death.

The show, released in March of this year in its entirety, has been binge-watched by everyone from teens to the adults who read the book as teens ten years' previously. It has also received pretty mixed reactions.

So, what is the problem? The show has been favourably reviewed. It's one of the most talked-about series of the year. And yes, this includes Game of Thrones. Rotten Tomatoes gave it an approval rating of 91%. IGN gave it 9.2 out of ten. Surely the critics know what they are talking about.

If we evaluate the show from a technical perspective, sure. It's good. The actors are excellent. The tension and build-up are well-executed. The cinematography compliments the whole feel. Netflix doesn't mess around and clearly have the budget to spare.

It was a chat with my bookclub that got me thinking and doing some reading over the weekend and that, ultimately, lead to me wanting to get my thoughts out there and perhaps facilitating more discussions around the problems with this show and similar media.

The events that unfold are mostly from Hannah's perspective. Clay, one of the recipients of the tape, also gives the viewers some insight, but we are still mostly dependent on Hannah to tell us what happened. This is problem number one.


Unreliable narrator, thy name is Hannah Baker. She is clearly suffering from some kind of mental issue which is never fully disclosed or dealt with in the series. Therefore how can we, as an audience, trust the information being told to us? I felt that Hannah's fallibility is never properly dealt with either. Instead of seeing the flaws in her character, the heat is constantly on the people whom she sends the tape out to.

Sending out those tapes is also one of the biggest acts of hubris I have ever seen. Hannah was focused on herself, her troubles. She obviously never considered the impact those tapes would have on the people listening to them. Or, maybe she did. It was a way to ensure that she would never be forgotten. And that someone would take responsibility and feel guilty for her death.

Wow. As I sit here, I cannot imagine how someone could think this is the best route to take.

Of course, Hannah was bullied. A lot of bad shit went down in her life. But who is the ultimate victim? Is it Hannah or is it Clay, the boy who didn't love her enough because he was afraid to.

Clay did nothing wrong, really. But he gets a tape too. And he gets the burden of survivor's guilt.

I am going to be frank. I was bullied in school. Badly. Physical and mental bullying. I was the kid who had a lazy eye, bad skin and zero boobs. I was reminded of all my flaws on a near daily basis. Kids are assholes. It's part of the high school experience.

But not once, ever, did I consider ending it all. Ever. Because I had the mental fortitude to deal with it.

The point here, which I mentioned earlier, is that Hannah had other problems. Clinical depression or the like where she was unable to deal with it. She was unable to cope mentally and eventually saw suicide as the only option. The show does not go into this and rather chooses to give the message that being decent will save someone. Being a friend will save someone. Which is complete rubbish. The issue is simply not that black and white.

If kids are entertaining suicidal thoughts, 13 Reasons Why is probably not the best show for them to watch. They may even be encouraged to leave their own tapes as some sort of legacy. There is also the issue where the audience might not be old enough to understand and rationalise that the suicide and tapes are basically a vehicle for the plot of the show.

The show has been criticised as glorifying suicide. That they are sending an irresponsible message out into the world where impressionable teenagers look up to media for examples. Yes, it is getting awareness out about bullying. That's all well and good. But being bullied is not the only factor.

The show could also be triggering for people who have tried to commit suicide in the past or have had someone close to them commit suicide. It also deals with two instances of rape, which could also be damaging. The show also has no tact in showing these scenes to the audience. It's pretty visual and disturbing.

Yes, we need to talk about issues like suicide. But, is running a show like this really the best way to raise awareness? If you have teens who love the show, chat to them. Make them aware of the differences between fiction and reality.
Posted by Monique at 7:13 AM