To kickstart Crime Month, I thought I would do a post on five awesome female fictional Detectives who really stand out for me. These characters come from both books and tv shows and are both awesome characters as well as competent in their fields. Plus, I am all for girl power here on the blog!


Mma Precious Ramotswe is the star of Alexander McCall Smith's Number One Ladies Detective Agency series. The series is set in Botswana and was turned into a tv series of six episodes.

Mma Ramotswe is a fantastic character, who uses her inheritance from her father to set up her own Detective Agency. She helps the locals solve cases such as missing husbands, kidnappings as well as helping herself overcome her own personal demons.

Being the first female Detective in Botswana, Mma Ramotswe has to overcome a lot of prejudice and sexism but it is her feisty hardheadedness that helps her endure and rise above this.

Teen Detective, Veronica Mars, was a huge part of my TV viewing. The show of the same name ran from 2004-2007 and featured Veronica following her Detective father's footsteps.

While her father tries to rein in her enthusiasm for solving mysteries, Veronica often ends up being a key player in solving cased before her father does, earning his respect. She also acts as an unofficial detective for her school's newspaper, assisting in helping out her fellow students.

Veronica had a pretty crappy childhood after her mother left her and her father when he lost his job as Sheriff. She was also ousted from the popular crowd at school and becomes a victim of sexual assault after her drink is spiked at a party. But she uses her knack for investigating as a catalyst to overcome these hurdles and is a strong character who stands up for what is right. 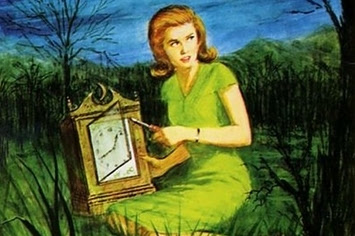 Created in 1930, Nancy Drew is one of the most iconic female characters of the past century. Her character has shifted with the times, but has always been a figurehead for girls to aspire to the world over.

Nancy is always driven by what is right and doesn't let the patriarchy get in her way. She can fix her own car, is trusted by her father and can even shoot a firearm.

There have been several TV series and films based on the series and new books are being written by new authors every year, continuing Nancy's legacy into the new millennium.

Castle's Kate Beckett is yet another strong, female character. The TV series would not be the same without her and author Richard Castle's banter and flirtatious relationship. She is also one of the few people who are immune to his crap, in spite of being a fan of his novels.

She is intelligent, well-read and also a bit of a geek at heart, having been an avid reader of comic books from a young age. I can personally relate to all these things. ;)

Tempe Brennan is the leading character in a series of books by Kathy Reichs. The character is later portrayed by Emily Deschanel in the hit TV show, Bones.

Bones is actually only very loosely based on the books, but rather draws inspiration from the life of author Kathy Reichs.

Tempe is not exactly the best with people, often struggling socially and missing social cues and references. However, she is a brilliant Forensic Anthropologist who uses her ability to remove emotions from a situation to approach crimes with logic and facts.


I will be doing another post on five more awesome characters, as I have realized there are just too many who deserve a mention! If you think I left someone out, please let me know in a comment!
Posted by Monique at 6:21 AM