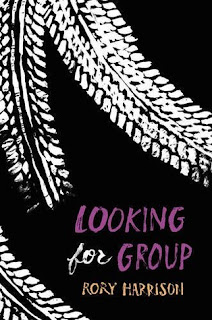 Dylan doesn’t have a lot of experience with comfort. His room in the falling-down Village Estates can generously be categorized as squalid, and he sure isn’t getting any love from his mother, who seemed to—no, definitely did—enjoy the perks that went along with being the parent of a “cancer kid.”

His only escape has been in the form of his favorite video game—World of Warcraft—and the one true friend who makes him feel understood, even if it is just online: Arden. And now that Dylan is suddenly in remission, he wants to take Arden on a real mission, one he never thought he’d live to set out on: a journey to a mysterious ship in the middle of the Salton Sea.

But Arden is fighting her own battles, ones that Dylan can’t always help her win. As they navigate their way west, they grapple with Arden's father (who refuses to recognize his daughter’s true gender), Dylan’s addiction, and the messy, complicated romance fighting so hard to blossom through the cracks of their battle-hardened hearts.


I was so excited for this book. It was supposed to tick all the boxes.

However, what I expected and what I read were vastly different things. Sure, there were all the WoW references by little gamer heart could desire, but that was about where the enjoyment stopped.

There was absolutely no fucking plot. None. Sure, the two protags had issues, but this does not a novel make. I felt like most of the time I was meandering around the confused mind of a teenager without a roadmap.

And, I am sorry, but the likelihood that a gay teen who has come to terms with his sexuality falling in love with a transgender female is pretty damn unlikely. Arden, for all intents and purposes, is a girl. Dylan feeling romantic feelings towards her is kinda like a giant middle finger in the face of her transition. It basically means he loves the boy parts about her and not the girl parts. This is pretty much how I see it anyway. And that is just plain unhealthy and also not something I think should be seen as an example of LBGTQ life. No. Just no.

I could be reading too much into it, but this is my opinion and I am sticking to it.

Plus, if a random boy rocked up at my house that I had only known online, I would probably call the cops. Not invite him him in for a stroll in Azeroth on WoW. Dylan just shows up and Arden is only mildly freaked for like three seconds.

I skimmed a lot of this. I was bored. I wondered when interesting things were going to happen. I got angry. I got bored. I got angrier.

This was also super John Green- like. Enough with the cancer sub-plot already. Enough with super special characters who are all sparkly, misunderstood snowflakes. I want realistic teens. I am not this old biddy who doesn't remember what those years were like.

Anyway, go read this if you want. If you like John Green, then you will probably enjoy this.
Posted by Monique at 12:53 PM

Email ThisBlogThis!Share to TwitterShare to FacebookShare to Pinterest
Labels: contemporary, LGBT, reviews, YA