Review: The Cathedral of Cliffdale by Melissa Delport 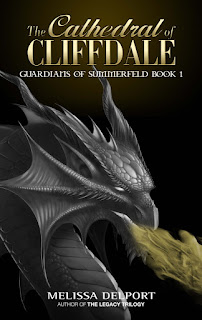 Beyond the limits of mankind’s understanding there exists a city, created as a sanctuary for the survivors of a brutal and bloody war.  Within the city of Summerfeld the last mythical creatures live out their days in peace, fiercely protected by twelve immortals: brave defenders known as the Guardians.

A Guardian is dead. For the first time in one thousand years, no replacement has come forward. Following the murder of her twin sister, Quinn Harden abandons the Guardianship in order to take care of her sister’s children in the modern realm of man. Shortly after their second birthday, the children are taken, against her will, in an attempt by the Guardians to bring her back into the fold.

Quinn will stop at nothing to find her niece and nephew, but as she is drawn deeper into the world of Summerfeld, she finds herself torn between her loyalty to her family and the wards she has sworn to protect.

As their enemies close in the Guardians must unite or Summerfeld will fall.


Welcome to the first stop on my local Indie author tour!

This book, the first in the Guardians of Summerfeld series, blends many magical creatures into one unique world.

I loved Quinn. I found her to be a strong, positive character who stands up for herself and her beliefs. I thought it was amazing that she cares so deeply for her niece and nephew that was basically willing to forsake her destiny for them.

The plot moves along swiftly, although I did feel at times that a lot of the happenings were simply there to familiarize the readers with certain aspects of Summerfeld. I trust, however, that this will not be a problem in book two! And I really enjoyed learning more about the world and its inhabitants.

I did love how each group of magical creatures had their own habits and quirks. I personally would love to see Summerfeld with my own eyes and possibly bond with a unicorn or two!

If you love urban fantasy and would like something with hints of local flavor, give this series a shot.


Stay turned for reviews on the next three books in the series and don't forget that you can win copies of your very own right here!