Review: One of Us is Lying by Karen McManus 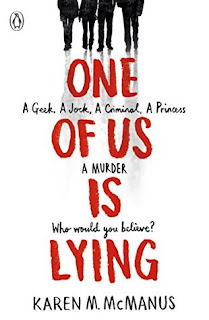 Title: One of Us is Lying
Author: Karen McManus
Publisher: Penguin (June 2017)

Bronwyn, the brain, is Yale-bound and never breaks a rule.
Addy, the beauty, is the picture-perfect homecoming princess.
Nate, the criminal, is already on probation for dealing.
Cooper, the athlete, is the all-star baseball pitcher.
And Simon, the outcast, is the creator of Bayview High's notorious gossip app.

Only, Simon never makes it out of that classroom. Before the end of detention, Simon's dead. And according to investi­gators, his death wasn't an accident. On Thursday, he died. But on Friday, he'd planned to post juicy reveals about all four of his high-profile classmates, which makes all four of them suspects in his murder. Or are they just the perfect patsies for a killer who's still on the loose? Everyone has secrets, right? What really matters is how far you would go to protect them.

I am a sucker for a good YA Contemporary. While the market is diluted with junk aspiring to be the next Fault in Our Stars, there are some real gems out there.

I had heard about this one on BookTube (where I seem to hear about most of the good new releases these days) and I figured that it was worth a shot as the premise sounded interesting. The author has also said she drew inspiration from The Breakfast Club, which is one of those classic teen films that reminds me of high school. So I had to give it a try.

I love this book. I binged it in two sittings because I had to know what happened.

This is one of those books that would make an excellent movie. I hope they do eventually make one because it was so cleverly executed and would translate well on screen.

The main cast of characters are stereotypes, yes. But they are also flawed and have secrets I was itching to discover.

I know you will also ship two specific characters, but I give nothing away. Nothing!

I really don't want to say any more, because the less you know going into this book, the better.

I can tell you that if you are looking for a better option than 13 Reasons Why, this is your book!
Posted by Monique at 7:21 AM