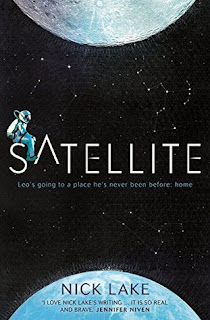 A teenage boy born in space makes his first trip to Earth.

He’s going to a place he’s never been before: home.

Moon 2 is a space station that orbits approximately 250 miles above Earth. It travels 17,500 miles an hour, making one full orbit every ninety minutes. It’s also the only home that fifteen-year-old Leo and two other teens have ever known.

Born and raised on Moon 2, Leo and the twins, Orion and Libra, are finally old enough and strong enough to endure the dangerous trip to Earth. They’ve been “parented” by teams of astronauts since birth and have run countless drills to ready themselves for every conceivable difficulty they might face on the flight.

But has anything really prepared them for life on terra firma? Because while the planet may be home to billions of people, living there is more treacherous than Leo and his friends could ever have imagined, and their very survival will mean defying impossible odds.

I was blessed with an advanced review copy of Satellite by the wonderful PanMacmillan SA. Thank you again for being so supportive of bloggers locally!

Satellite would have been an amazing read, but I am just one of those readers who gets super irritated by sms-speak. The whole novel is told in this way with ''u'' for "you" and the like. I honestly didn't see the point of this nor did I feel it added any value to the reading experience. If you are someone that would be irritated by this style of writing, perhaps read a sample first before purchasing the book.

The book did have some good points, though!

Satellite is also a very sad read at times and I think fans of more dramatic, character-driven YA will enjoy it.

To compare it to The Martian though is a bit of a stretch. But I don't really take any kind of comparisons seriously, as they are often just used to draw people into the novel. Sorry, but it's true.

The best part about this book is that it will be enjoyed by boys, who honestly drew the short end of the stick when it comes to choices on the YA shelf. So if you need something for your 15-17 year-old son to read, this is not a bad bet.