Review: Turtles All the Way Down by John Green 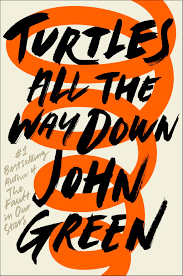 Sixteen-year-old Aza never intended to pursue the mystery of fugitive billionaire Russell Pickett, but there’s a hundred-thousand-dollar reward at stake and her Best and Most Fearless Friend, Daisy, is eager to investigate. So together, they navigate the short distance and broad divides that separate them from Russell Pickett’s son, Davis.

Aza is trying. She is trying to be a good daughter, a good friend, a good student, and maybe even a good detective, while also living within the ever-tightening spiral of her own thoughts.

Those who have been following the blog for a while might have picked up that I am not the biggest fan of John Green. I was not excited for this book. I did not care that this was coming. But, I was also curious. I wanted to see if Green was capable of listening to criticism and if he was able to improve on the faults in his Stars.

I was also fortunate to have had R230 in Exclusive Books vouchers, so I basically paid R10 for Turtles. At least, even if the book was shit, I was going to get my money's worth.

When I picked the book up, I found I could not put it down again. I could relate to Asa on some weird level. While she is OCD and I am not, I am a chronic nailbiter, sometimes fiddling with my nails until I draw blood. Asa has a weird tick that she does with her finger and I found that so relatable. Just like I sometimes used my nails as an outlet for my stress, Asa treats her finger in much the way. And it is not something either of us has full control over.

I also found Green lost a lot of his eccentricities in his writing. His teens were a little more toned down, although Asa still felt like a Manic Pixie Dream Girl at times. I also enjoyed the simplicity of his writing. I felt he was simply getting the story out on the page with very little embellishment. This made me happy.

This book is about Asa and her struggles. The plot is secondary to that, so don't expect anything exciting to happen, but rather approach this book as one would getting to know a new acquaintance.

If you hated all the books Green wrote before Fault in our Stars, try this one anyway. And fans will enjoy it regardless.