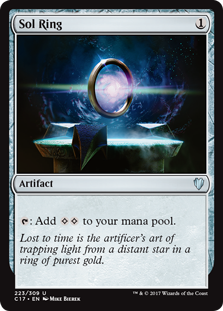 If you are new to Magic, or even new to the more casual format of Commander, it can be a little daunting picking which cards will work well in your particular deck.

Fortunately, Commander does have some pretty solid staples which will fit in, no matter who your choice of Commander is.

With this in mind, I have picked the list below as a good starting point for any Commander deck. These are all colorless and will either help you fixing mana, improving early game board state or just generally being annoying to your friends. The best part is that these are fairly cheap, although not always the easiest to come by due to their key place in Commander decks.

My advice is, if you see these in your buddy's trade file, grab them and ferret them away for future decks. Or let me know you have them!

A one-cost artifact that you can immediately tap for two colorless mana is a bit crazy. If you are able to get this down on your first turn, it sets you up nicely for a four-cost drop in turn two. Which is, basically, insane in this format.

This is why pretty much all the pre-constructed commander decks will have one of these. It helps you and it will upset your buddies.

Something you can equip for free and move around, keeping your most important guy protected, is always a good idea. No spells that say "target" will be able to touch him.

This is useful if you have a Commander that has both active and passive abilities, but you don't need to target with anything else.

It also sticks around if the creature it is equipped to dies, ready to help you out again.

So you dropped a big, bad boy and you want to start hurting your opponents right away? Swiftfoot boots allows for just that, as well as protection from targeted removal.

Sure, you have to pay to equip it, but the payoff is a little better with having a creature on the battlefield ready to bring some pain.

This is a pointless card for mono-color decks, but should be standard with just about any other deck than runs two or more colors.

It will fix your mana issues and is free to use, without getting any pain for tapping it for a color. Good luck finding them, though, as they are scarcer than an honest politician.

A waste for a mono-colored deck, but dead useful if you are screwed for mana of a particular color. Especially if you are one of those players who runs all five colors.

Can also be used with or replaced by Terramoprhic Expanse, which is literally the same card.

It's a land that taps for one colorless and gives you an unlimited hand size. What's not to love?

It's also quite annoying for your opponents because it's not often they will have land-destruction and, if they do, they usually overlook the Tower.

A free artifact that gives you an unlimted handsize.

Perfect to back up Reliquary Tower and will also fly under the radar of most of your opponents.

Temple of the False God

A land that taps for two colorless mana once you control 5 or more lands, this is perfect for mid-game.

It will help you get your big boys out onto the field and also help you recover if you miss a land drop.

If your deck allows you to constantly sacrifice creatures and retrieve them from the graveyard, this card is an obvious choice.

He lets you fetch a land when he enters the battlefield and lets you draw a card when he dies.

If your deck runs three or more colors, this is a great addition to help with mana fixing.

It allows any land you control to tap for any mana and it also has that same ability.

A three cost artifact that taps for any color of your commander's colour identity. Basically, acts as the poor man's Command Tower.

If you can produce tokens you are not really attached to, running Skullclamp lets you kill them off to draw two cards. If you don't have worthy tributes out on the battlefield, it can just sit there until you need the card draw.

This useful land taps for any colour mana that lands your opponents control can produce.

I am sure you see the theme by now. Mana can be problematic in Commander and there are a lot of ways to help ease your woes.

This also helps you with mana issues and is indestructible. Plus, if someone wipes out your lands, this will help keep you in the game.

Helping you with mana rap, this is an artifact that taps for three of any colour mana.

An artifact that comes into play tapped, but tap it and pay one and you basically reset the board by wiping all artifacts, creatures, and enchantments.

Your opponents will be either scrambling to get rid of it or waiting for the inevitable destruction.


And there you have it! I hope you find this little guide useful in kitting our your decks.