Review: The Law of Tall Girls by Joanne Macgregor 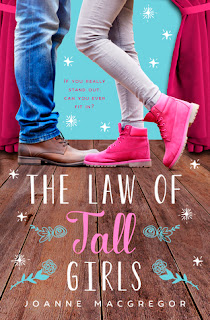 When you really stand out, can you ever fit in?

Seventeen-year-old Peyton Lane is a tall girl. So tall, it’s the only thing most people notice about her.

On impulse, she accepts a bet to prove she can be as attractive and desirable as other girls. Now she just needs to go on four dates (including the prom) with one of the guys on her very short list of very tall boys.

Number one on the list is Jay Young – the new guy that Peyton already likes way more than she should. Because not only is Jay already taken, he’s also breaking her Law of Tall Girls, and he’s determined to discover the awful secret she’s been hiding for most of her life.


I cannot relate to being a tall girl. Maybe a skinny girl back in the day, before my 30's hit me like 20 kg. Literally. I was worried about relating to Peyton, the protagonist, but that actually wasn't a problem at all. And not for reasons I was expecting either!

The Law of Tall Girls, in spite of generally being a fun, romantic read, had some pretty dark themes which I appreciated so much because they were not blown out of all proportion like the style of a lot of YA contemporaries these days. I know I harp a lot about the failings of John Green's earlier works, but he is solely responsible for the recent wave of "sick-lit" with authors trying to emulate his particular style and weirdly mature, deep characters who are into odd shit like Neitsche.

This book was not like that at all and the teens were still teens. Peyton and her friends are wonderful and a joy to spend time with. The romance is well-paced and believable with some seriously swoony moments.

Of course, if I had to tell you the thing that really made me connect to Peyton (and even got a bit emotional about it), I would be giving away a major plot point. So just go read the book already!

If you are seeing this post BEFORE Sunday the 17th February 2018, The Law of Tall Girls is still on special for a steal at $0.99 on Amazon here. I have not just helped you find a read for this weekend, but also helped you save money. So go buy it.

Also, this book was nominated for and won YA Book Central's Best Indie Award!