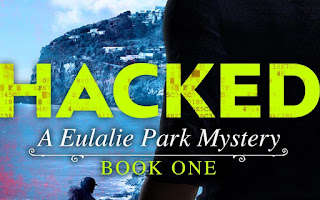 
Marcel Faberge is not a popular man. When he turns up dead, there is no shortage of suspects. Unfortunately, one of them is Fleur, the best friend of private investigator, Eulalie Park.

Fleur was last seen threatening Faberge in front of dozens of witnesses. A knife from her coffee shop is the murder weapon.

Will Eulalie be able to prove her friend's innocence before she is arrested for murder by Prince William Island's newest chief of police, Donal Macgregor? In a world where Russian mobsters rub shoulders with crooked racehorse owners and shady businessmen, Eulalie will need all her skills to unravel this mystery.

And so begins the first of an exciting, new series reminiscent of Nancy Drew by South African author, Fiona Snyckers.

When I saw the first book, Hooked, was launched, I was drawn in first by the cover and then by the promise of  the unexpected. Unfortunately, I am notorious for collecting books on my Kindle and didn't get around to reading it right away. This didn't stop me from getting the second and then third books and then beginning a Eulalie bingefest.

Some of the things that really stood of for me with the first two books were: 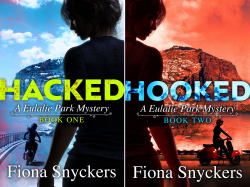 Each book in the series offers a stand-alone mystery building on the context from the previous books. So, you really do need to read them in order! There is also an interesting twist which I am not going to reveal but I can promise makes this series even more fun and compelling!

Both Hacked and Hooked were quick, addictive reads and will be perfect for the upcoming Easter weekend. The third book, Haunted, is also out and I really do suggest you get all three on your eReader as you will be as eager to keep going as I was. Eulalie is basically Nancy Drew for an older audience and I am loving it.