Magic 101: Tips for Getting into Magic: The Gathering 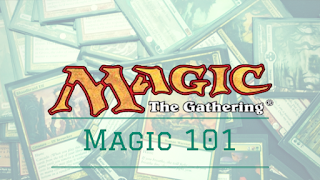 I imagine that for players looking to start playing an established game like Magic: The Gathering, it's kind of like standing on the edge of a pool, wanting to dive on. Only, when you do, you realize that the pool was a mirage hiding a stormy ocean filled with overwhelming waves, crosscurrents and hidden rocks.

This is literally when I felt like when I started playing again four or so years back. Magic is vastly complicated. Not only are there various kinds of formats to play, there are so many cards, products, and events to choose from, that finding an easy point of entry is challenging.

For this post, I am not going to be discussing any of the rules and other technicalities around actually playing Magic. This is simply going to focus on the best ways to get started with minimal confusion and wastage of money. This is based on my own experiences and observations and I am sure other players may disagree with some of these points. However, I feel that players who have been competitive for a long time can forget how confusing it can be as a beginner and sometimes give advice that can be either overly complex or impractical.

Let me shatter the first myth that a lot of new players believe. You cannot simply buy a preconstructed deck, learn the basic rules, and go play at your local game store (LGS) and expect to do well. Preconstructed decks are those sealed products many stores sell as an entry point into the game. The current incarnation of these are the Plainswalker decks, which include a 60 card deck and a single booster. 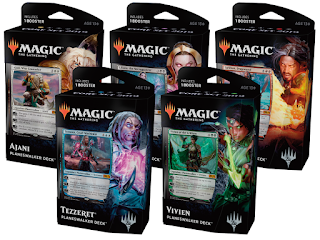 I am not being dismissive of this product at all, as I also maintain that this should be the first item any new player should buy.

A Plainswalker deck is only really enjoyable if you play against another Plainswalker deck as they are designed to be at a similar power level. To take this deck to an event, where you will be playing against people who have spent thousands on building finely tuned decks, is just madness and would be a soul-crushing experience for any new player. However, if you attend events purely with the intention of gaining experience and seeing other decks in action, then you will not be disappointed in your final standings and will hopefully remain encouraged keep playing the game.

Also, new players should be misled into buying boosters. This is the biggest waste of money as you would be better off looking for specific cards you need instead of relying on chance. Each booster only contains one rare card, which might not even be of any monetary value. Boosters are good for a format of Magic called Draft and as prizes. That's about it.

Magic has a very complex rules system, so one should master the basics first. Practice as often as possible so they become second nature and you are able to put more focus on what your opponent is doing and your potential interactions with him/her. You will never stop progressing and developing as a player, so you should treat every person you meet and play with as an opportunity to expand your skills and knowledge. There are a plethora of resources online and, if you are unsure about anything, rather look it up right away before assumptions breed incorrect habits.

Pick a local store that has regular events and get to know the people there, as these will be your best resources to not only learn from but also to trade with when you are ready to build your first deck. Even if you are not playing in an event that day, hang around and watch others play. Most Magic players are in the habit of talking through their turns to assist their opponent in understanding what they are doing and to give the opportunity to respond. This is a great way to pick up information and learn how various cards and decks work.

You will also notice that Magic has several formats to chose from. The one you pick will depend on your goals as a player and is also influenced by funds. I will only detail the more popular ones here for simplicity's sake.

When you are comfortable, you can then start collecting cards for the deck you would like to build. I reccomend checking out various decklists online so that you can get an idea if you

As mentioned, the internet offers a host of resources to learn from. Here are some of my top choices for new players:

If you are based in South Africa, here are some of the best places to visit to learn and get cards:

I hope this has been of some help! Please let me know if you have any questions?
Posted by Monique at 3:34 AM