Review: She-Ra and the Princesses of Power 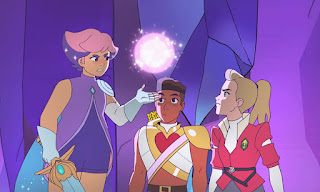 Last month, Netflix launched the first season of the She-Ra reboot, She-Ra and the Princesses of Power.

My memories of the original 1985 Filmation series are hazy at best, as I was too young to really follow and appreciate it. So, this is not going to be a comparison between the old and the new. I think enough people have done that already. I also want to put it out there upfront that I am well over the target age for this show.

When Netflix let the world know that is would be hosting the She-Ra reboot, helmed by one of my favorite artists Noelle Stevenson (Nimona, Lumberjanes) I was there like a bear. I had been following Noelle for a whole on social media and enjoyed her perspective on the world. I also knew that, like her other work, she would be sure to bring across a strong diversity message with She-Ra. 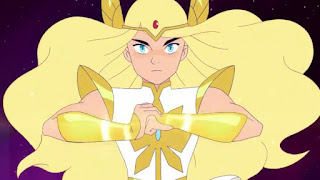 When they released the first stills from the show, there was an immediate backlash that, frankly, pissed me off. People, mainly men, where complaining that She-Ra was androgynous. That she didn't have curves. That the animation was shitty and simplistic. Noelle Stevenson had people rage-tweeting her for ruining their childhood.

This sort of reaction is exactly the level of stupid one can expect from social media these days and I can say, now that I have seem a fair chunk of season one, that the show does not deserve it.

She-Ra and the Princesses of Power  is a well-scripted show with lovable characters and an engaging plot. Adora, our main character, is 3-dimensional and, while filled with doubt at times, takes on the various challenged presented to her head-on. The relationship between Adora and the main antagonist, Catra, is deep and complex and seems to form the foundation for much of the arcing storyline. 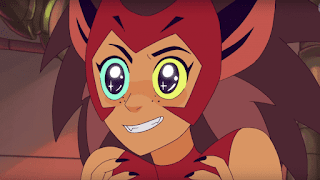 The animation is engrossing and we are even treated to the classic-style cutscene whenever Adora transforms into She-Ra, a nod to the original series.

The outstanding aspect of this series, however, is the representation and diversity presented. We get characters of different ethnicities, body types and sexual orientations. There are strong females everywhere and only one prominent (and very likely queer) male  in the main cast. This is a much-needed thing where we are usually dominated by strong male characters and females in need of rescuing.

Season One clearly sets the stage for the rest of the series, getting the audience familiar with the characters, setting and background.

I cannot fault the show in any way and highly recommend to give it a watch. This in spite of being 20 years above the age of the target audience.
Posted by Monique at 5:15 AM