Review: KeyForge - Call of the Archons 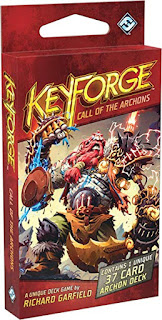 Hey everyone. I know it's been a while since I posted something, so I decided to get the New Year off to a good start with a review of the new card game, KeyForge.

From the creator of Magic: The Gathering, Richard Garfield, KeyForge offers something a little different in the sense that it is not a traditional trading card game. You do not get booster packs nor can you customize your decks like you can in MTG.

Each deck consists of 37 cards and is completely unique and given the name of an Archon, a character in the game that you represent by playing that deck. You do not know which deck you get until you open your box, which adds to the fun of KeyForge. Each deck represents 3 of the 7 "houses" in the game and contains any combination of the cards currently in print. Fantasy Flight Games, the producers of the game, claim that 104 billion unique decks are possible. 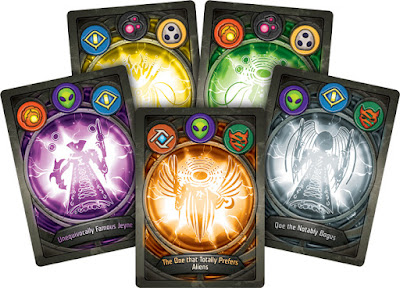 The game revolves around the idea that you, as Archon, have a goal to unlock these secret vaults of knowledge to gain power. In order to do this, you must race your opponent by creating three keys. The player who manages to make three keys first wins the game.

I am not going to detail the rules of play here, but you can refer to the Fantasy Flight Games website for the rules of the game.

One obvious advantage of KeyForge is that, once you have bought a deck which costs a reasonable R215, you are set to play and be competitive. There is also a starter kit you can get which has all the necessary tokens and contains 2 decks and 2 intro decks, but this is not really required and can also prove to be hard to find due to the games unexpected popularity. You can use dice, poker chips, and other goodies just as effectively.

The caveat is that, until you open and play with your deck, you can't be sure if it is actually good, as decks do seem to have varying power levels. You cannot customize decks, as they are all printed with the name of the Archon they represent and cannot be mixed up at all. 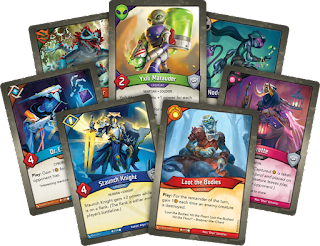 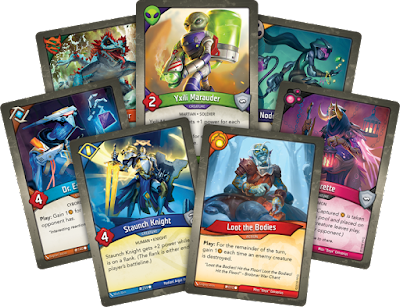 KeyForge is also relatively simple to grasp, though I do curse the lack of inclusion of basic rules with the decks. I also believe the starter kit doesn't have a rulebook included with it either. But, that's ok. Everything is on the website and you can also watch some YouTube videos of people explaining the game's mechanics. Alternatively, pop into your local gaming store and chat with the staff there for some assistance.

I find KeyForge to be a refreshing, fun change to MTG. It also is easier to learn and can be played by friends and families around the dinner table as an addition to board games. The art and design of the cards are colourful and fun with some amusing names and subtle humor mixed in.

I attended my first KeyForge event and really enjoyed playing with other people as the community is new and everyone is there to learn their decks and the game. In fact, this is why it's a great time to pick this game up if you have been thinking about trying it out as you will definitely be able to learn and grow with your local community. Tournament software is still, sadly, in development. I do see on the app where you can register your decks that you will be able to track your wins and losses with each deck, which will be great once a formalized structure is in place for competitions.

But I am a Magic player and come with a different set of expectations for gaming events, so take that as inconsequential if you are just wanting something fun to play with friends.

All in all, KeyForge has exceeded my expectations and I am very excited to see what developments they have to offer in future. I do believe that Call of the Archons is just the first set available as well and there will surely be new cards out in future sets, adding to the variety of decks you can get or play against.
Posted by Monique at 8:58 AM