Review: Wait For Me by Caroline Leech 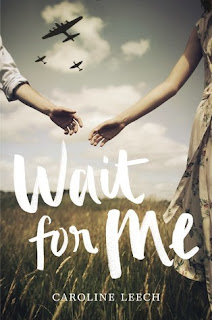 
“I am German, yes, but I am not a Nazi. There is a difference, and one day I hope you understand that.”

It’s 1945, and Lorna Anderson’s life on her father’s farm in Scotland consists of endless chores and rationing, knitting Red Cross scarves, and praying for an Allied victory. So when Paul Vogel, a German prisoner of war, is assigned as the new farmhand, Lorna is appalled. How can she possibly work alongside the enemy when her own brothers are risking their lives for their country?

But as Lorna reluctantly spends time with Paul, she feels herself changing. The more she learns about him—from his time in the war to his life back home in Germany—the more she sees the boy behind the soldier. Soon Lorna is battling her own warring heart. Loving Paul could mean losing her family and the life she’s always known. With tensions rising all around them, Lorna must decide how much she’s willing to sacrifice before the end of the war determines their fate.

Wait for Me is one of those random second-hand buys that intrigued me because it is set during WWII. This period has inspired some excellent YA books that are both inspirational and educational (A blog post for another day, maybe?).

I binged this one in an afternoon and really enjoyed what it had to offer. Wait for Me is a romance at its heart, set in rural Scotland away from the frontlines. Lorna is an interesting character, who is at first very influenced by what she has been told about the Germans and the War. When Paul, a German prisoner of war, arrives at the farm to work, she is at first disgusted that they have a German on their doorstep.

Obviously, her boundaries and perceptions are pushed by Paul, who is an amazing, well-rounded character to learn about.

I absolutely loved this novel. I feel that it deals with life on the edge of war well. Loved ones who might not return home and the threat of being drafted are part of Lorna's friends and family's lives.

The romance is tender and develops well with the progression of the story and Lorna's own maturity.

You will feel all the emotions reading this and I cannot fathom why it is not more talked about as it's a stunning debut that is wonderfully written. Leech is a very competent writer who never over- or under tells her story.

Obviously, it is not the gritty war tale that is like Rose Under Fire, as an example. I did see a review which commented that this romance makes light of war. This completely untrue and, in fact, I feel that this is a story that shows hope blooms in the unlikeliest of settings.

Recommended for YA romance fans and anyone who enjoys character-driven stories set against the backdrop of war.
Posted by Monique at 8:25 AM